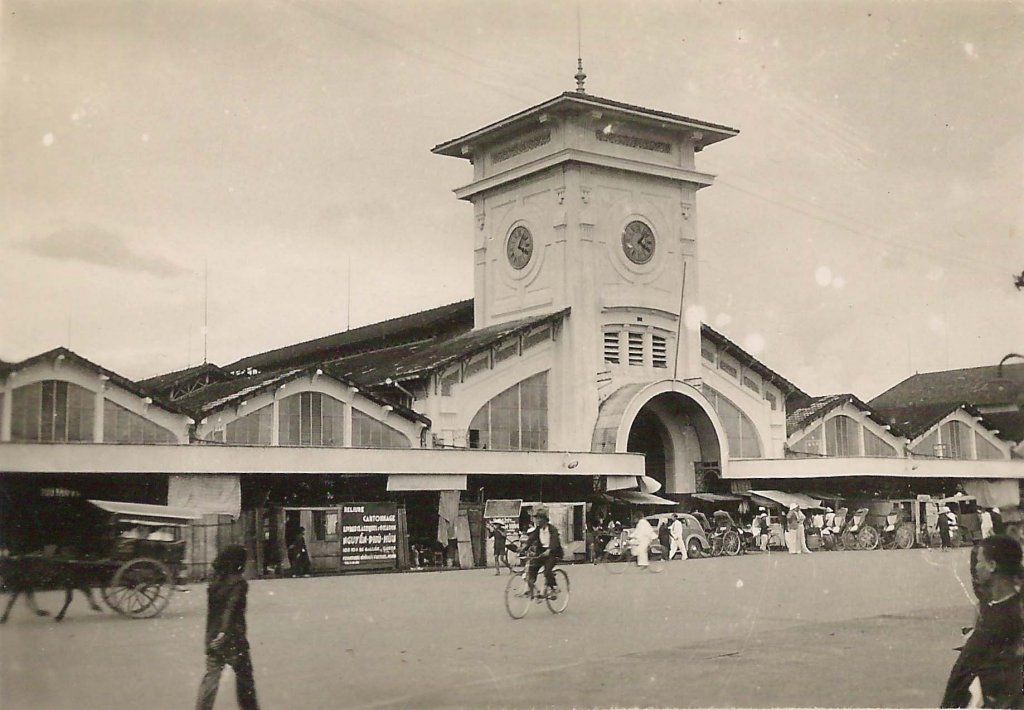 “We can still celebrate Tet”

With this succinct, direct an intriguing proclamation that would have been worth millions of marketing dollars today, a banner stretched across a makeshift bamboo pavilion sought to give the people of Saigon, suffering from a severe economic downturn, a psychological lift out of their depression.

The proclamation was backed by people shouting out the attractions of various products through an improvised megaphone – a piece of cardboard rolled into a cone. It was 1934 and the banner and the announcements were a ploy thought out by scholar and patriot Nguyen An Ninh and his friends.

It had its desired effect, and vendors at the Ben Thanh Market in HCM City have not looked back since.
A quiz show on the 300 year history of Saigon releaved that this was how the currently common practice of hawking various products through loudspeakers was born.

These days, the centrally-located Ben Thanh Market is as busy as usual, especially as yet another Tet approaches, The fresher-than-ever flowers outside the North Gate are blooming in greater variety, and the path from the North Gate is bearing more fruits than ever before. Inside people are thronging to stalls selling mut Tet (dry sweetened fruits, jams and candy). These are a must to welcome visitors home during the Lunar New Year festival.

The 60 year-old woman selling cosmetic brought back by Viet kieu (overseas Vietnamese) or their families or those who have returned from a trip abroad, says the Ben Thanh Market is always cheerful and bustling, tet or no Tet.

The market is indeed a must-visit destination for the thousands of Vietnamese and foreign visitors who crowd the city everyday. The foreigners are drawn by the sights and sounds of an oriental market, while the Vietnamese are looking for bargains and products they’ve nit been able to find elsewhere.

For residents, the market is a place for doing some actual purchasing or window-shopping, as prices are often higher than other market. For those experienced in shopping at the Ben Thanh Market, the prices have to be bargained down to half or even two-thirds of the stated price.

The shopkeepers have finely tuned antennae that can spot a visitor from a regular very easily.

The tale of two markets

When northerners and people from the Cuu Long (Mekong) Delta drifted into Saigon at the beginning of the 17th century, vendors grouped together at streets along and near the Saigon River. The market was know as the Ben Nghe or Ben Thanh Market, because of its location near the wharf (Ben) and the Turtle Citadel or (Quy Thanh).
After taking over the Gia Dinh Citadel in 1859, the French colonialists built a large covered market on the site where the Banking Institute now stands. The thatch-roofed and mud-floored Ben Thanh Market stood in the vicinity of large canals which are now the streets of Le Loi (then Bonard), Nguyen Hue (Charner), Ham Nghi (De la Somme) and Pasteur (Pellerin).

Historical documents reveal that trading at the market was brisk as it was convenient for the traders to travel back and forth from the wharf and the commercial port. In 1870, however, a big fire razed the market to the ground and the French decided to built a new one with metal frames. the new one became the largest market in Saigon.

In 1912, the mayor of Saigon then ordered the construction of a new market for the city in a marshy land called Le Maraise Boresse. After the construction of the new market completed two years later, the old roofed- Ben Thanh Market later was replaced by the National Treasury (Le Tresor Public) and which is presently the Banking Institute.

The newly-built market was then called the New Ben Thanh Market or the New Saigon Market to differentiate it from the old one. The new market was located opposite Quach Thi Trang Square at the end of le Loi Street and surrounded by Le Thanh Ton, Phan Chu Trinh, Phan Boi Chau streets.

The only reminder that the market is situated on what used to be a pond is that, along with Le Thanh Ton street on the north side, it is at a lower level than Ly Tu Trong Street, which runs parallel to Le Thanh Ton Street.

The New Ben Thanh Market was officially opened in March 1914 with a grand ceremony that “broke all records for festivities”. Old-timers who witnessed the event still remember it well and take pride in having witnessed the ceremony that the press described as being equivalent to a “New King Festival.” In his “Saigon in the Old Days,” first published in the 1960s, the late Vuong Hong Sen, famed archaeologist and antique collector, recalls that the market opening ceremony drew large numbers of people from nearby provinces. People then often joked: “I have witnessed the New Market opened ceremony, I can die now.”

History records also show that until the 1950s, a railway station stood in front of the Ben Thanh Market. Two main routes passed it: one east-bound, running between Saigon and Lai Thieu; and the other heading west from Saigon to Cho Lon.

In the early decades of the last century, the surrounding area so deserted and quite that traders and merchants in the market could hear the inter-provincial trains’ whistles as they approached the Hoa Hung Station.
The trains invariably carried goods from many provinces on the central coast, among them Phan Thiet and Phan Rang.

Over nearly a century of development, the market has been the most prosperous commercial centre of Saigon and all southern provinces. Even now, it is a place where one can find the best f items that the country produces or imports. It is place where one is advised to go for whatever item is needed, especially those that are not to be found elsewhere.

In 1985, the market underwent a major renovation, which expanded it and gave it a fresher look. There have been two features that planners will be loath to change: the market gates on the four sides; and the famous clock on the southern gate, the main entrance of the market, that is a landmark symbol of HCM City.

After yielding most of its area to the treasury office first and the Banking Institute later, the Old Ben Thanh Market is now popular as old Market in Ton That Dam, mainly selling canned goods, drinks, toiletries and fresh foodstuff. – VNS